How many Quixotes would we have today?

Adventures of a workshop

There are those who believe in literary workshops and those who do not. I remember that on one of his trips to Havana in 2003 - after fighting with the revolution due to the execution of three young men who tried to divert a boat in order to reach the Florida coast - the writer José Saramago was invited to Cuba to give a series of talks and present the Cuban edition of The Gospel According to Jesus Christ. Back in the fold it was the perfect reconciliation.
I was present at one of those meetings held at the Onelio Jorge Cardoso Literary Training Center. When asked by a young apprentice whether or not the award-winning author believed in literary workshops, the old man was blunt: "I don't believe in literary workshops!" In defense of his judgment, he mentioned the fact that neither Cervantes nor Quevedo had attended literary workshops. The young man neither short nor lazy, wounded in his faith, challenged him by asking how many Cervantes there would be if the monarchy had been given to irrigate the peninsula with them. How many Quixotes would we have today? From that moment there was no talk or anything. The Onelio Jorge Cardoso Center against José Saramago. A sterile debate, but one that the author seemed to enjoy.

In several of his novels Roberto Bolaño deals with the subject of poetry workshops in Chile, before Pinochet's military coup and, later, in the capital of Mexico, where he lived and wrote part of his work. For Bolaño, these poetry workshops had something sinister about them. A kind of metastasis of literature that took on a life of its own through an absurd number of dubious quality magazines devoted to the genre. His skepticism is not Saramago's door slam, but he does approach the existence of the workshops from satire. That says everything.
I am of the opinion that workshops do not train writers like academies train musicians, artists or actors. Nobody who passes a literary workshop, no matter whether it is narrative or poetry, will become a writer. To be a writer you need something more. Something of your own. A special talent that you simply have or you don't.
However, workshops are helpful. Doubly useful, I'd say from experience.
Knowing narrative techniques - yes, those that we instinctively use from cave days until today when telling a story - facilitates countless invaluable resources related to writing. Being aware of these is added value in support of talent. The candidate will be better prepared to solve the challenges of fiction.
Without forgetting that this knowledge, as critical experience, allows a more active approach to reading. Unlike a simple reader, who knows the narrative techniques with some depth, will approach the reading from unusual points of view, and will make this a more enriching experience.
From the Quartier Literario space we will be putting narrative pieces generated by the literary workshop taught at Legados ─ an institute aimed at teaching Spanish through Latin American arts and cultures for the readers' consideration. These are stories created from exercises and situations that act as triggers for possible stories. The set of themes is varied, ranging from eroticism to the current pandemic, passing through science fiction, terror, religion, the fantastic. The stories are also approached in different tones and registers, exploring humor, the parodic, the tragic at times.
Working with the members of the workshop has been an extremely rewarding exchange. Every story read here was the subject of heated debate among the workshop participants. Each of these stories should be read for what they were: party and exorcism.
Francisco García González
Montreal, julio de 2021 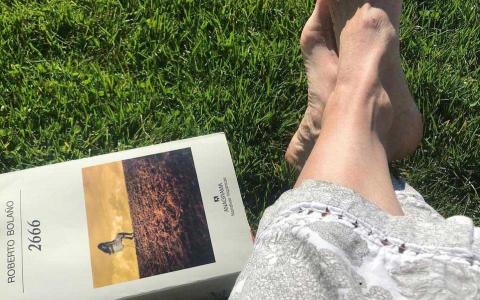 Why do we Read?