Skip to main content
We live among different languages
Your heritage language is a valuable tool.
admin
11/16/2021 - 22:39 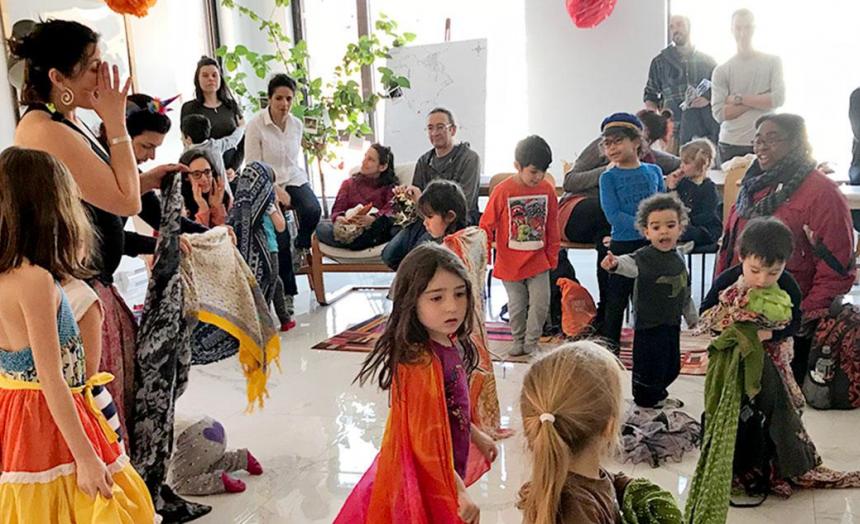 “Knowing how to read and write in the language of your immigrant ancestors (be it Spanish, Korean, Mandarin or Armenian) makes you wiser and more powerful. I know it by experience”. (Tobar, H, 2016)

A language is a social action, it’s socially situated and in contact with other languages and varieties. But, above all, a language belongs to its speakers.
In a multilingual context -as in Montreal’s case- where there are two official languages and recognized minority languages, immigrants are often caught in difficult processes of negotiation between learning and using the official languages and preserving and transmitting their heritage language to their children.

A heritage language is “an inherited language which is not the main language in the context where an individual lives” (Sánchez 2012). It is the language that immigrants speak at home and it’s different from the official language spoken in the host society. Kristeva (1998 :10) quoted in Kramsh (1998 :32) explains that today’s modern individuals, despite being immigrants and living their culture in another territory, appreciate their national and ethnic identity and their intrinsic, subjective and irreducible difference. Language is a key component of an individual’s cultural identity.

As immigrants, subjects develop a complex and varied identity combining symbols, values, practices, and life styles from both the host society and their country of origin. We could say subjects reinvent themselves playing different roles and thereby re-shaping their identity as if it were a dough to which different ingredients are added.

Families accompany the process of integration to the host society. Parents, in our case Spanish-speakers, face a double challenge: on the one hand, ensuring the preservation of their culture by transmitting it to their children and on the other, making their children’s social integration possible. Immigrant families often feel an emotional need of preserving their language. Asserting one’s linguistic identity is asserting one’s roots and it is inseparable from our cultural identity.

The multilingual context where immigrant parents and their children live has an impact on the private domain of the family where conflict and tension often arise when it comes to the construction of linguistic identities. What language should be learned? Which language should be used? Which one does each individual identify with?

The percentage of families of mixed national origin is high in Montreal. According to the 2016 Canadian census, Spanish is the third most frequently spoken language after Arabic and Mandarin. In these family contexts where one parent speaks French or English as their mother tongue and the other speaks Spanish, children are educated in one of the official language s and they don’t often feel identified with Spanish and its use is thus reduced.

The heritage language, Spanish in our case, allows children:

At the same time, Québec and Canada also benefit from the fact that immigrant children and young adults have a better command of their heritage language because these individuals will be able to:

In a word, maintaining and transmitting the language and culture of origin plays a key role in enhancing academic achievements and the psychosocial well-being of individuals, who often prove to be more open and tolerant towards others, which strengthens their social integration into the host society.

This linguistic and cultural transmission starts at home where children begin their process of language acquisition. In order for children to develop different competencies in the home language, they need to study it and use it in broader social contexts beyond the home.

About Language Varieties and Judgments about them

When languages come into contact, conflicting ideas often arise due to value judgments, criteria of language use and perceptions speakers have about them. This is also the case when varieties of the same language come into contact. In the case of Spanish, there’s peninsular Spanish and Latin American varieties. The former is considered the standard variety and is perceived as ‘correct’; it enjoys social prestige and legitimacy. However, the perceptions and ideas that speakers hold about a language and language varieties are shaped by the social, cultural, political and economic status of the speakers of one or another variety. (Moreno Fernández, 2009)

Speakers hold a multiplicity of attitudes and value judgments about language and language varieties which contribute to maintaining or transforming the sociolinguistic environment where they live. These values and ideas are not neutral: they are linked to linguistic ideologies. Linguistic ideology, as José del Valle (2007) explains, is a system that articulates notions about language, language use and communication with specific cultural, political and social representations. That is, a linguistic ideology links the linguistic domain with a non-linguistic domain –the social order-, naturalizing and normalizing it (José del Valle y Victor Merinho-Guedes, 2016). These ideologies respond to the interests of concrete social groups and the value attributed to one or another variety reflects the dominant ideas that circulate about the social group that speaks that variety rather than its linguistic functionality.

Spanish as a Heritage Language Program : We are Pioneers in this!

We firmly believe that language is a valuable asset that reaffirms the Latin American-Canadian identities of the new generations and we know there isn’t an offer that caters for our linguistic and cultural needs as a Latin American community. Thus, we’ve embarked on the task of creating a program that teaches Spanish as a heritage language.

At Legados, we respect all language varieties and focus on increasing the value of Latin American varieties as they represent our cultural identities. These are the varieties we speak at home.

Learners need to learn both to generate value and respect for their own variety of Spanish and to have an ear for other varieties of Spanish.

Linguistic Profile of Speakers of Spanish as a Heritage Language

Latin American- Canadian children coming to Legados will be able to develop all language skills through an artistic and cultural program. We teach through Latin American literature, arts and culture.

A New Teaching Approach for Speakers of Spanish as Heritage Language

Objectives of the Spanish as a Heritage Language Program

Each person comes to Legados from different places and having followed different paths, with their own memories and distinctive ways of speaking. Together we make of diversity an intercultural experience ; together we embrace the differences proper to the linguistic identities that inhabit each one of us. In this way, we are appreciating our culture and creating together in Spanish.

Together we weave words and stories. We deeply know that in our work we materialize a legitimate wish to teach children to keep their eyes open, to develop empathy for the things and beings that surround us. After all, that’s also teaching and learning a language.